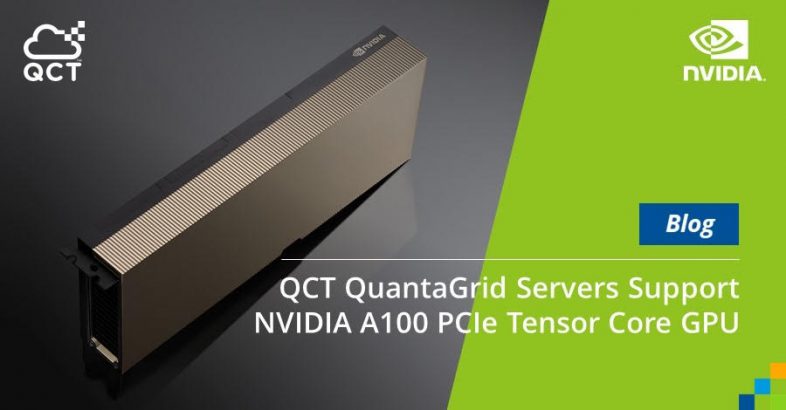 The latest and greatest NVIDIA GPU architecture has been enabling our data center needs for quite a while now, and the power these accelerators deliver have solved some of the world’s biggest scientific, industrial, and big data challenges using high-performance computing. Since the release of the NVIDIA Volta architecture in 2017 and Turing architecture in August 2018, we’ve been awaiting the launch of the next generation. This year, at its annual GTC Digital conference,  NVIDIA announced its A100 Tensor Core GPU, based on the new NVIDIA Ampere architecture.

The NVIDIA A100 GPU features third-generation Tensor Core technology with up to 20x higher compute performance over the previous generation (V100 GPU) to accelerate diverse workloads. Scaling applications across multiple GPUs, the A100 is available in 4-GPU and 8-GPU HGX configurations, and a scalable PCIe form factor, that provides QCT servers with unprecedented acceleration. It builds on an ecosystem of deep learning frameworks and development tools: CUDA-X libraries, over 700 HPC applications, and over 1.8 million developers. The NGC-Ready systems and NGC software repository round out the data center platform with containerized software stacks, so that developers can achieve optimized performance at scale and accelerate deployment. The NGC-Ready systems undergo extensive AI software testing, ensuring that these servers are capable of deep learning and machine learning workloads. We will expand our NGC-Ready system offering with the A100 GPUs.

The NVIDIA A100 includes new multi-instance GPU (MIG) technology, and NVIDIA NVLink – which offers 600GB/sec of GPU-to-GPU interconnect. This versatile NVIDIA data center platform can enable AI inference and training in a broad range of fields, including healthcare, finance, manufacturing, and retail, which are key elements in the global HPC market. Prior to this announcement, QCT had announced it would be offering the NVIDIA HGX A100 8-GPU to expand and accelerate hyperscale data centers. QuantaGrid server systems (D52BV-2U, D43KQ, and D52G-4U) supporting up to eight NVIDIA A100 PCIe GPUs are also available from QCT to isolate GPU instances in truly elastic data centers for workloads of all sizes.

Additionally, QCT plans to add the new NVIDIA EGX A100 configuration to its edge server portfolio to deliver enhanced security and unprecedented performance at the edge. The EGX A100 converged accelerator combines  NVIDIA Mellanox SmartNICs with A100 GPUs powered by the new NVIDIA Ampere architecture, so enterprises can run AI at the edge more securely.